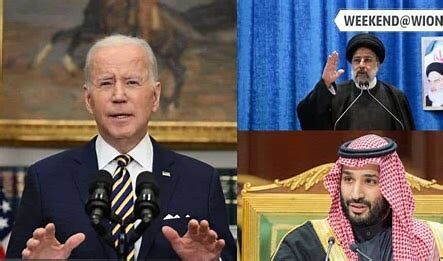 In a bid to compensate for the US ban on Russian oil, President Joe Biden has reached out to checkered oil regimes that he and former leaders of the country spectacularly snubbed or sanctioned in the past. These include United Arab Emirates (UAE), Qatar, Iran, Venezuela, and Saudi Arabia.

While the Biden administration is calling it a diplomatic masterstroke and saying it is part of a larger game plan, analysts are slamming the bizarre diplomacy which they believe will backfire.

They also believe he risks accusations of propping up authoritarian leaders and undermining his own battle for democracy.

With the rise in crude prices brought on by the Ukraine war and Washington’s decision to block all imports of Russian oil and gas, there is an urgent need to find other supply sources.

The average US price for regular unleaded gasoline has hit a record $4.25 a gallon, though that is about $1 a gallon below the inflation-adjusted peak.

US Strategic Petroleum Reserve levels fell last week to their lowest since July 2002, as the Biden administration had already approved releases in November as part of a larger effort to boost the US fuel supply.

Additional supply from OPEC could compensate for some supply shortfalls created by disruption to Russia’s oil sales by economic sanctions imposed by the United States and other governments. But not for all of it.

Russia’s economy faces the gravest crisis since the 1991 fall of the Soviet Union after Western nations imposed sanctions on Russian companies, banks, individuals, and its central banking system, following its February 24 invasion of Ukraine.

“We have an interest globally in maintaining a… steady supply of energy, including through diplomatic effort,” Secretary of State Antony Blinken said Wednesday on the moves toward countries that have been out of US or Biden administration’s favour, and in the case of Iran an armed threat.

“We have a multiplicity of interests, and use diplomacy to try to advance them,” Blinken said.

The phrasing, as Russia’s war raises the stakes in many areas, was a marked change from Biden’s praise at the outset of his presidency of democratic values as “America’s abiding advantage” in diplomacy.

Saudi Arabia has profited richly in the past couple of years from teaming with fellow top petroleum producer Russia to keep global oil and natural gas supply modest and prices high.

And Biden came to office vowing to isolate the crown prince, Mohammed bin Salman, and the rest of the Saudi royal family over abuses that include the 2018 killing of US-based journalist Jamal Khashoggi.

Above all, the US government is on the back foot in its ties with oil-rich Gulf monarchies.

The White House on Wednesday was forced to deny a Wall Street Journal report which said the crown princes of Saudi Arabia and the United Arab Emirates had declined to accept calls by the US president.

At the same time, news site Axios raised the prospect of a Biden trip to Riyadh in the spring in a bid to convince the kingdom to pump more oil.

“I don’t know whether he’s up to eating that much crow,” Saudi Arabia analyst David Ottaway said of attempts now by Biden to improve his administration’s relations with Prince Salman and Saudi Arabia, the country that could most easily end the global supply crunch. “He was going to make a pariah of this guy.”

Gulf Arab states have so far taken a neutral stance between Western allies and Russia, with which they are partners under an oil producers’ alliance known as OPEC+. Saudi Arabia and the UAE also have investment and business ties with Moscow.

A Gulf Cooperation Council (GCC) statement read out by Saudi Arabia at a UN General Assembly session last week had affirmed the bloc’s “deep ties” with all parties involved and called for de-escalation, restraint, and diplomacy to end the conflict.

Meanwhile, amid the war unleashed by Russia in Ukraine, a recent American mission to energy-rich Caracas was intended to be discreet.

US government emissaries met with Venezuela’s controversial leader Nicolas Maduro, a sworn enemy of Washington which disputes his legitimacy as president.

But news of the meeting leaked and the Biden administration was left scrambling to explain why it was engaging with an authoritarian regime.

Biden could certainly boast of success, as Caracas on Tuesday released two Americans detained in Venezuela. But the trip clearly had other motives.

“What we are doing is going all around the world, working with partners and organisations and entities, to try to increase the amount of oil on the market” and stabilise prices,” said Victoria Nuland, the State Department’s number three diplomat.

There are just a handful of countries that produce the “heavy fuel” that Russia was exporting, “so frankly we’ve got to look everywhere that we can,” she said, without ruling out that Washington could buy Venezuelan crude.

The Trump Administration in early 2019 sanctioned Venezuela’s state oil company PDVSA to squeeze Nicolas Maduro’s brutal regime, which has impoverished the country, persecuted political opponents, and sent millions of refugees across the region.

But Venezuela continues to pump about 800,000 barrels a day with help from Russia and Iran. Venezuela has returned the favor by supporting Putin’s war on Ukraine and denouncing the West’s “economic war” against the Russian people.

Effectively, said Richard Goldberg, a former National Security Council official under the Trump administration, the Biden administration is saying of Iran, “They will still be financing terrorism, but let’s go ahead and buy their oil.”