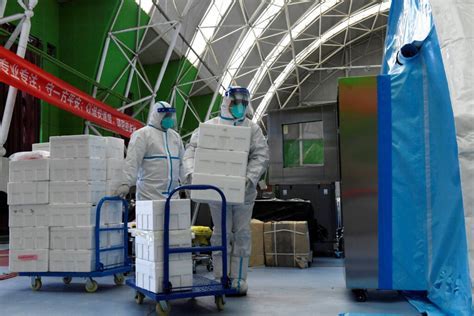 SHANGHAI, Jan 18 (Reuters) – China is urging people to wear masks and gloves when opening mail, especially from abroad, after authorities suggested the first case of the Omicron coronavirus virus variant found in Beijing could have arrived via a package from Canada.

Authorities vowed to step up disinfection of overseas mail and are insisting postal staff handling it are fully vaccinated.

The precautions come less than three weeks before the capital opens the Winter Olympic Games and as several Chinese cities work to suppress new outbreaks of coronavirus infections.

“Be sure to protect yourself during face-to-face handovers and wear masks and gloves; try to open the package outdoors.”

Health officials said the person found infected with the Omicron variant had opened a package from Canada that had been routed through the United States and Hong Kong, and transmission via the package “could not be ruled out”. read more

The case highlighted the importance of “personal defence”, CCTV said.

Similar suggestions on how to handle parcels, not just those from overseas, were made by the National Health Commission on its official WeChat account and reposted by authorities in the cities of Shanghai and Nanjing.

China has been an outlier in asserting that COVID-19 can be transmitted via cold-chain imports such as frozen meat and fish, even though the World Health Organization has played down the risk. Beijing has also been pushing a narrative via state media that the virus existed abroad before it was discovered in late 2019 in the central city of Wuhan. read more

U.S. Centers for Disease Control and Prevention said last year that the relative risk of coronavirus infections through contact with contaminated surfaces or objects is considered low.

Without all the evidence it was hard to draw conclusions with certainty, but some scientists questioned Beijing’s theory on Tuesday.

David Heymann, professor of infectious disease epidemiology at the London School of Hygiene and Tropical Medicine, said it wasn’t clear how it would be possible for the virus to survive in the mail given that it spreads via droplets surrounded by moisture and stops being infectious once it dries out.

When asked by CNBC about the idea that Omicron had been introduced into China through the mail, Pfizer Inc board member and former U.S. Food and Drug Administration chief Scott Gottlieb said he didn’t think it sounded plausible.

“It sounds like a lot of theory,” he said.

In recent weeks, China has been battling a resurgence in cases in several cities, some of them of the highly transmissible Omicron variant. On Tuesday, it reported 127 new local cases with confirmed symptoms. read more

China Post has also been reminding recipients of overseas mail to disinfect the contents “in a timely manner” with stickers pasted on parcels.