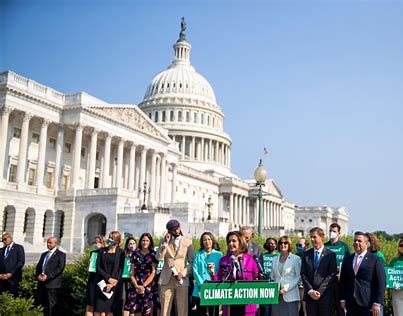 Since President Joe Biden took office, he and some congressional Democrats have pushed strongly for the creation of a New Deal-style initiative: the Civilian Climate Corps (CCC).

On Friday, congressional Democrats unveiled text from the more than 2,000-page reconciliation bill. Among its many appropriations, the new CCC will receive a substantial appropriation.

President, Progressives Have Long Fought for the Program

The broad strokes of the program were introduced by Sen. Bernie Sanders (I-Vt.) when he unveiled his $3.5 trillion budget on the Senate floor in early 2021.

Most significantly, the proposal got a green light from the White House.  At his April address to congress, the commander-in-chief tied “meeting the climate crisis” to the creation of new jobs.

“For me, when I think climate change I think jobs,” the president explained.

Senate Majority Leader Chuck Schumer (D-N.Y.) also put his weight behind the proposal, promising during a press conference to “fight to get the boldest CCC possible.”

Schumer was joined by Rep. Alexandria Ocasio-Cortez (D-N.Y.), who drafted the controversial Green New Deal.  The congresswoman took to the stage to defend the CCC.

“What if [the CCC] led to tens of thousands of new trails in our national forests and park service?” she asked rhetorically. Ocasio-Cortez continued, “ This isn’t something we have to imagine doing—that was the record of the original [New Deal-created] Civilian Conservation Corps in 1938.”

The program, she asserted, “is not a pipe dream, and is not some big and progressive vision that is ‘unrealistic.’” Rather, “this is what we have already done.” The New Deal Civilian Conservation Corps, Ocasio-Cortez said “was the largest peacetime mobilization of young Americans in American history.”

Ocasio-Cortez, who holds considerable weight in the House progressive caucus, wants modern Democrats to challenge that ambitious record. Ocasio-Cortez argued that Democrats’ “mandate today is not just to revive some of the most ambitious programs and ideas, but so much of this is about how we go even bigger and better than we did originally.”

With the text of the budget finally released after weeks of negotiations between the House, Senate, and White House, the specific details of the program are clearer.

The program is delegated around $4.5 billion by the legislation, split into two separate appropriations for slightly different purposes.  In fact, however, the program will indirectly receive much more, as the bill designates billions more in funding for specific projects to be undertaken by the CCC.

The first of these $2.25 billion appropriations, says the bill, is “to be used for staffing, salaries, and other workforce needs to support the development of a Civilian Climate Corps for the purposes of managing National Forest System land.” The legislation also guarantees that salaries for those who join the program will be at least double the federal poverty line.

The Secretary of Agriculture will help to manage the project.

The bill notes that “restoration” of public lands and forests is the program’s “primary purpose,” and orders the Secretary to give these initiatives priority. To help carry this out, the bill devotes billions more to specific projects.

One such project is a $10 billion appropriation to reduce the quantity of hazardous fuels in at-risk areas that are close to cities, a prescient concern for Democrats in the wake of deadly wildfires across the western U.S. The bill appropriates $4 billion more to the Secretary to be used for reducing hazardous fuels further away from major population centers.

A further $1 billion in the bill is dedicated to “vegetation management projects.” These projects, the bill notes, are restricted to National Forest System lands, woodlands protected and managed by the U.S. government. Another $500 million is dedicated to the same purpose, but specifically to be directed towards vegetation management that helps in separate watershed or water source protection plans. $500 million more is specifically dedicated to managing vegetation to reduce “uncharacteristically severe” wildfires.

The second $2.25 billion appropriation to the CCC in the bill is more streamlined. This funding, the bill says, is specifically slated for “rural and urban conservation and tree planting projects.”

This section of the bill incorporates both conservation projects and wildfire prevention projects, employing forces beyond the CCC to achieve this goal. It allots around $14 billion to this purpose, much of which can be received in grants by qualifying state, local, tribal, or private sector applicants who help in the project.

In total, the bill allots upwards of $35 billion to the CCC or adjacent projects. Its direct funding, $4.5 billion, falls short of Biden’s goal of $10 billion in funding.