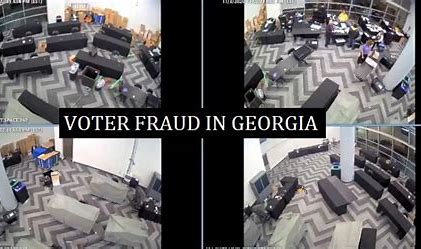 On Monday night Garland Favorito, the founder of the election integrity group VoterGA, announced he will hold a press conference on Tuesday morning.

VoterGA will review highlights of its amended ballot inspection complaint and provide proof that election fraud occurred in the November 2020 election.

The press conference will start at 10:30 AM Eastern.

Garland told The Gateway Pundit on Monday that he expects the news will be on the Bannon War Room on Tuesday morning.

On Tuesday morning VoterGA sent out a statement of their findings before the press conference.

ATLANTA GA – Petitioners in a lawsuit organized by VoterGA to inspect Fulton County ballots have added stunning claims in their amended complaint and provided new evidence from public records that show Fulton County’s hand count audit of the November 3 rd 2020 election was riddled with massive errors and provable fraud.

Most new allegations and evidence are based on a VoterGA data team’s analysis of Fulton’s November 2020 mail-in ballot images made public after petitioners won a court order on April 13th and VoterGA lobbying efforts led the Georgia General Assembly to make all images public under Open Records Requests beginning March 25th.

The team’s analysis revealed that 923 of 1539 mail-in ballot batch files contained votes incorrectly reported in Fulton’s official November 3rd 2020 results. These inaccuracies are due to discrepancies in votes for Donald Trump, Joe Biden and total votes cast compared to their reported audit totals for respective batches. Thus, the error reporting rate in Fulton’s hand count audit is a whopping 60%.

Fulton Co. failed to include over 100,000 tally sheets, including more than 50,000 from mail-in ballots, when the results were originally published for the full hand count audit conducted by the office of the Secretary of State for the November 3rd 2020 election. Those tally sheets remained missing until late February when the county supplemented their original audit results.

Petitioners contend that Fulton County did not provide drop box transfer forms for at least three pickup days when obligated to do so via an Open Records Request. Those missing forms are still
needed to provide chain of custody proof for about 5,000 ballots.

The VoterGA data team also found over 200 Fulton County mail-in ballot images containing votes not included in the hand count audit results for the November election. All these anomalies are now included in the Fulton County ballot inspection lawsuit as additional counts of how the Equal Protection and Due Process Constitutional rights of Georgia voters were violated.