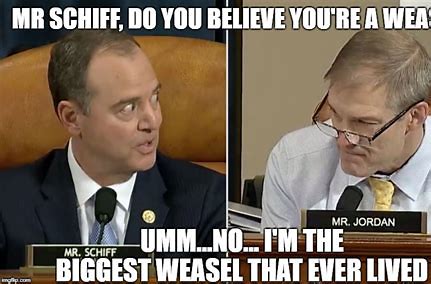 The House January 6 committee admitted on Wednesday that it doctored a text message from Jim Jordan to Mark Meadows, as was first reported by The Federalist.DECEMBER 15, 2021
By Sean Davis

Following reporting by The Federalist that Rep. Adam Schiff, D-Calif., and his staff doctored a text message between Rep. Jim Jordan and former White House chief of staff Mark Meadows, the House Jan. 6 committee admitted over email that it did, in fact, doctor the text message.

As The Federalist reported on Wednesday morning, on Jan. 5, 2021, Jordan forwarded to Meadows a three-paragraph legal summary from attorney Joseph Schmitz, summarizing a four-page legal memorandum Schmitz had written regarding congressional certification of the 2020 presidential electoral vote count.

In a statement provided to The Federalist via email, a Democrat spokesman for the Jan. 6 committee confessed that the committee doctored the text message.

“The Select Committee on Monday created and provided Representative Schiff a graphic to use during the business meeting quoting from a text message from ‘a lawmaker’ to Mr. Meadows,” the spokesman wrote. “The graphic read, ‘On January 6, 2021, Vice President Mike Pence, as President of the Senate, should call out all electoral votes that he believes are unconstitutional as no electoral votes at all.’”

“In the graphic, the period at the end of that sentence was added inadvertently,” the spokesman admitted. “The Select Committee is responsible for and regrets the error.”

The Jan. 6 committee spokesman did not explain how one could “inadvertently” cut a sentence in half and eliminate the final two paragraphs of a detailed legal summary, nor did he explain why Schiff attributed the content of the text to Jordan, “a lawmaker,” rather than to Schmitz, the attorney who wrote it.

As The Federalist reported on Wednesday morning, the original Jan. 5 text to Jordan was written by Washington attorney and former Department of Defense Inspector General Joseph Schmitz and included an attachment of a four-page draft Word document drafted by Schmitz that detailed Schmitz’s legal reasoning for suggesting that Pence had the constitutional authority to object to the certification of electoral votes submitted by a handful of states. The piece that Schmitz had sent to Jordan was published at the website everylegal.vote the next morning and even included the same “DISCUSSION DRAFT” heading and timestamp as the document that Schmitz sent to Jordan.

In his statement, Schiff erased the final two paragraphs and the final clause of the first paragraph of the text message before inserting punctuation that was never there, all without disclosing what he was doing. The graphic displayed by Schiff, which was doctored to look like an exact screenshot, was similarly doctored, as it contained content that was never in the original message and eliminated content that was.

“Good luck tomorrow!” Schmitz texted Jordan on the evening of Jan. 5, including the Word document as an attachment. Schmitz then texted to Jordan a three-paragraph summary of his Word document, which Schiff sliced and diced and then attributed to Jordan.

The Jan. 6 committee has been roundly criticized for refusing to allow any Republicans appointed by House Minority Leader Rep. Kevin McCarthy, R-Calif., to sit on the committee. House Speaker Nancy Pelosi, D-Calif., banned McCarthy from appointing any Republican members and instead hand-picked her own troops to run the chamber’s inquisition. According to a source familiar with the matter, Schiff never bothered to contact Jordan to ask about the text or confirm its contents, authorship, and veracity.

Multiple lawmakers contacted by The Federalist mocked Schiff for peddling an obviously doctored text, and said anyone even remotely familiar with Jordan would know that he was forwarding an analysis without comment given that he rarely, if ever, sends texts that span more than a word or two.

“That’s just not Jim’s style,” one lawmaker close to Jordan told The Federalist. “Long, nerdy paragraphs might be my style, but that’s not Jim’s style at all.”

“Plus, you have to remember what was going on at that time,” the lawmaker noted. “People were sending around these law review articles and debates left and right because we had an interest in learning the facts and getting them right. And if it’s somehow seditious in this country to debate or share a law review article on Alexander Hamilton’s view on things, that’s not really a country I want to be a part of anymore.”

Another lawmaker close to Jordan laughed out loud when asked if Jordan would ever write out his own lengthy legal analyses via text.

“If he texts at all, it’s usually something like ‘yes’ or ‘call me,’” that colleague said.

“The idea that Jordan would sit down and punch out a long-winded legal argument via text is absurd,” one individual who regularly talks to Jordan told The Federalist. “That’s just not how he works.”

Copyright © 2021 The Federalist, a wholly independent division of FDRLST Media, All Rights Reserved.