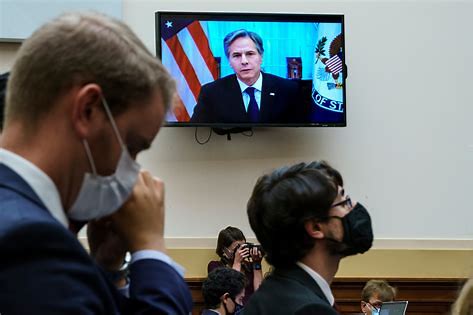 Secretary of State Antony Blinken, testifying before the House Foreign Affairs Committee on Monday, tried his best to defend the Biden administration’s chaotic, mismanaged debacle of an Afghanistan withdrawal. As with all other things Blinken has touched over the course of this sordid affair, he failed.

The proper remedy for such a failure, and the gobsmacking dereliction of duty and stain on America’s reputation such a failure represents, remains Blinken’s prompt resignation.

“We inherited a deadline. We did not inherit a plan,” Blinken stated, referring to the Trump administration’s previous agreement to remove all U.S. forces from Afghanistan by May 1.

News flash: It was the Biden administration that moved the withdrawal deadline to August 31 as part of a ham-fisted attempt to assure America’s departure from Afghanistan prior to the symbolic 20th anniversary of 9/11. The result: America’s withdrawal transpired during the Taliban’s peak summertime “fighting season,” all but assuring that the Taliban flag would fly over Kabul on September 11, 2021.

Blinken similarly, and disingenuously, doubled down on another common tactic used by Democratic talking heads to try to somehow explain this disaster: He appealed to the commonly held sentiment that America’s servicemen and servicewomen were long overdue to depart the Afghan backwater.

“There’s no evidence that staying longer would have made the Afghan security forces or the Afghan government any more resilient or self-sustaining,” Blinken thundered defiantly. That is correct — and the proper lesson to learn is to end these feckless neoconservative nation-building boondoggles once and for all. But that substantive foreign policy lesson has nothing whatsoever to do with the manifold procedural ways in which this particular withdrawal was epically botched.

Blinken, much like his doddering boss, has no intellectually defensible ground to stand on. This administration stranded Americans behind enemy lines — nay, jihadist lines. This administration let the Taliban, Afghanistan’s ruling extremists, break out of detention thousands of terrible prisoners, including many senior-level al-Qaeda operatives. This administration allowed the Taliban to acquire tens of millions of dollars’ worth of high-tech aircraft and armored vehicles — including a whopping 70 Mine Resistant Ambush Protected vehicles, which cost $1 million apiece and are designed to withstand blasts from improvised explosive devices.

This is a bona fide scandal. It is perhaps the most embarrassing diplomatic fiasco in American history. And any secretary of state worth his salt would resign posthaste.

Antony Blinken appears to be no such man.