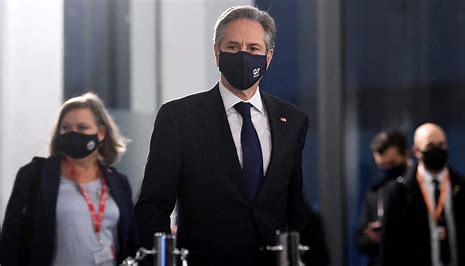 By Dmitry Antonov and Humeyra Pamuk

Secretary of State Antony Blinken said the document, handed over in person by U.S. ambassador to Moscow John Sullivan, addressed Russia’s concerns and raised those of the United States and its allies.

He told reporters the response sets out a serious diplomatic path forward, should Russia choose it, and has a principled and pragmatic evaluation of Moscow’s concerns. He added that the United States was open to dialogue.

“Putting things in writing is … a good way to make sure we’re as precise as possible, and the Russians understand our positions, our ideas, as clearly as possible. Right now, the document is with them and the ball is in their court,” he said.

Washington has made clear that Russian demands for NATO to pull back troops and weapons from eastern Europe and bar Ukraine from ever joining are non-starters, but says it is ready to discuss other topics such as arms control and confidence-building measures.

Whether President Vladimir Putin is prepared to accept that limited agenda will determine the next phase of the crisis, in which Moscow has massed around 100,000 troops near the border with Ukraine while denying it plans to invade.

Russian Deputy Foreign Minister Alexander Grushko told Interfax news agency, when asked how much time Russia would need to study NATO’s response: “We will read it. Study it. The partners studied our project for almost a month and a half.”

NATO Secretary-General Jens Stoltenberg called on Russia to “immediately de-escalate the situation”, saying disagreements must be resolved through dialogue and that every nation should be free to decide its own security arrangements.

In Paris, diplomats from Russia, Ukraine, France and Germany held more than eight hours of talks on ending a separatist conflict in eastern Ukraine, part of the wider crisis between Moscow and Kyiv that risks becoming a full-scale war.

Earlier on Wednesday, responding to comments by U.S. President Joe Biden that he would consider imposing sanctions personally on Putin, Russia said such a move would not hurt the Kremlin leader but would be “politically destructive”.

Biden said on Tuesday personal sanctions on Putin, though a rare step, could be considered as part of a concerted drive by Washington and its allies to convince Moscow that any new aggression against Ukraine would bring swift and massive costs.

Putin’s personal wealth is a sensitive topic in Russia. According to his most recent official disclosure, he earned just shy of 10 million roubles ($126,175) in 2020.

Peskov has previously said that imposing sanctions on Putin would amount to a severing of diplomatic relations.

Russia meanwhile staged new military drills on land and on the Black Sea and moved more paratroopers and fighter jets to Belarus, north of Ukraine, for what it describes as joint exercises there next month.

Ukraine said Russia was trying to sow panic. Foreign Minister Dmytro Kuleba said Moscow had not yet massed sufficient forces for a large-scale offensive, but that did not mean it could not do so later.

Germany said it would supply Ukraine with 5,000 military helmets, amid growing criticism of its refusal to join the United States, Britain and others in providing weapons to defend against Russia’s much larger army. read more

Kyiv Mayor Vitali Klitschko told Bild newspaper the German delivery was a joke. “What kind of support will Germany send next?” he asked. “Pillows?”

Britain’s Defence Secretary Ben Wallace, visiting Berlin, said it was for each NATO member to decide how to help Ukraine, adding: “We’re not sitting in judgement over other countries”.

The United States has spent weeks trying to build agreement with allies on a strong sanctions package if Russia attacks. But the task is complicated by Europe’s dependence on Russian energy and that sanctions would hurt its own businesses too.

Italian business leaders, including power company Enel , UniCredit bank (CRDI.MI) and top insurer Generali (GASI.MI), went ahead with a video conference with Putin on Wednesday despite a call from their government not to take part.

Ukraine was not discussed, the Italian organiser said.

Responding to the sanctions threats, Russia’s rouble hit its lowest level against the dollar since November 2020, having fallen more than 13% in the last three months.

Commenting on Wednesday’s four-way talks in Paris in which he took part, the Kremlin’s representative on Ukraine, Dmitry Kozak, said Kyiv had failed to respond to proposals made by the Russian-backed separatists. He said he hoped the next round of talks in Berlin in two weeks’ time could narrow the differences.

In a joint statement the officials of the four countries reaffirmed their commitment to upholding a ceasefire agreement.

Some 15,000 people have been killed in the conflict in the Donbass region of eastern Ukraine since 2014.