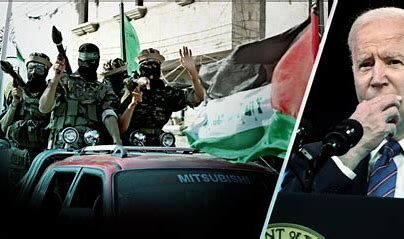 How the Biden Administration Is Funding the Effort To Delegitimize Israel

The Biden administration is offering nearly $1 million for groups to investigate alleged human rights abuses in Israel, the West Bank, and the Gaza Strip, an effort that will delegitimize Israel, according to sources who spoke to the Washington Free Beacon.

The State Department’s Bureau of Democracy, Human Rights, and Labor (DRL) is soliciting nonprofit groups to apply for grant money up to $987,654 to “strengthen accountability and human rights in Israel and the West Bank and Gaza,” according to a grant notice first posted online in mid-February.

Groups applying for the grant money will investigate alleged crimes inside Israel and these territories and “collect, archive, and maintain human rights documentation to support justice and accountability and civil society-led advocacy efforts, which may include documentation of legal or security sector violations and housing, land, and property rights,” according to the State Department.

Israel’s defenders on Capitol Hill expressed outrage over the program and said the Biden administration is helping fund international efforts to delegitimize Israel and boost the anti-Semitic Boycott, Divestment, and Sanctions movement. The grant is also fueling concerns about the Biden administration’s relationship with Israel and its hiring of officials who have been critical of the Jewish state.

“This is disgraceful,” Sen. Ted Cruz (R., Texas) told the Free Beacon. “The Biden administration wants to use American taxpayer money to subsidize the international NGO campaign to demonize and isolate Israel, which then serves as a basis for anti-Semitic efforts to boycott and wage economic warfare against Israeli Jews. Congress did not appropriate funds for this purpose and has repeatedly condemned such campaigns.”

The State Department, Cruz said, “should immediately cancel this program and investigate how it was approved.”

The Biden administration’s nominee to head the bureau offering the grant, Sarah Margon, has been stalled in the Senate for months due to her anti-Israel activism and statements.

Before being nominated to head the DRL bureau, Margon served as Washington director at Human Rights Watch, a nonprofit organization that routinely criticizes Israel and accuses it of engaging in “crimes against humanity.”

Margon has also expressed support for Israel boycotts. Additionally, in a September 2021 confirmation hearing before the Senate, she said, “I believe the private sector across the board has an important role to play in not promoting or pursuing discriminatory policies.”

George Salem, who lobbied for the Palestinian government from 2015 until late 2021, was appointed chairman of the U.S. Agency for International Development’s Partnership for Peace Fund board, the Free Beacon first reported. Salem was registered as a foreign agent for the Palestine Monetary Authority, a government agency directed by the Palestinian Authority, the West Bank government controlled by Fatah party leader Mahmoud Abbas. The Palestinian government, under Abbas’s leadership, has faced criticism for its mishandling of foreign aid, including using funds for its “pay-to-slay” program, which pays salaries to convicted terrorists and their families.

The Biden administration recently hired Elizabeth Campbell, former director of the United Nations Relief and Works Agency (UNRWA) for Palestinian refugees, as a deputy assistant secretary of state at the Bureau of Population, Refugees, and Migration. UNRWA has long faced criticism by lawmakers and regional experts for promoting anti-Semitism and terrorism in Palestinian schools. Campbell, in her work as a top UNRWA official, oversaw the agency’s controversial use of school textbooks that promote anti-Semitism and hatred of Jews, the Free Beacon reported earlier this week.

The anti-Israel grants are part of a broader policy inside the Biden administration that aims to elevate Palestinians and attack Israel, according to former U.S. officials and aides who spoke to the Free Beacon.

“It would be a waste of taxpayer dollars and morally blind of the State Department to spend this money in Israel,” said Bonnie Glick, former deputy administrator at USAID.

The State Department, Glick told the Free Beacon, “should support the people willing to drive a new era of Palestinian politics, untainted by terror, corruption, and intimidation.”

A senior Republican congressional aide who works on foreign policy matters and is familiar with the grant project accused the Biden administration of treating Israel as a “pariah” state.

“This is the kind of grant you give to build civil societies in autocratic and broken regimes, not for close democratic allies like Israel,” the aide told the Free Beacon. “The problem is that the Biden administration is filled with people who spent decades getting paid to try to make Israel into an international pariah. They failed, but now they’re using the State Department to try to do it.”

A State Department spokesman defended the grant when asked about it by the Free Beacon.

“The State Department seeks grant applications from and funds programs with a wide range of nongovernment partners around the world,” the official said. “These programs are intended to foster respect for human rights and the rule of law and support democracy globally.”