Are You Using Zoom on Your Mac? You Should Check Your Microphone Settings After Owners Discovered App Keeps on Recording Audio Even When it’s Not in Use 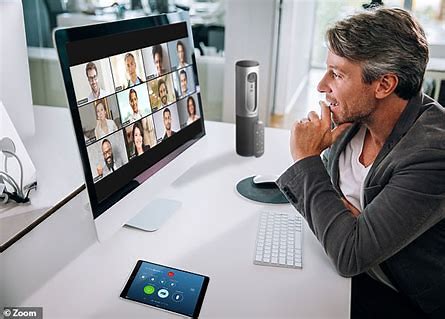 By JAMES GORDON FOR DAILYMAIL.COM

Mac users who are using the Zoom video meetings app say the program is keeping their computer mic on even when not specifically using the application.

The glitch is relatively recent with users noticing something was amiss after the latest Apple operating system, macOS Monterey, was loaded onto computers.

The system now incorporates a visual notification to alert users when their mic or camera is being used.

An orange dot appears if the mic is being used while a greet dot will show up in the menu bar if the camera is being accessed  Apple shares video showing when your camera and mic is in use. Mac owners who are using Zoom meetings say their computer’s mic is on even when the app is not being used

On December 27, Zoom said they had updated the software to fix the problem stating version 5.9.1 (3506) ‘resolved an issue regarding the microphone light indicator being triggered when not in a meeting’, reports The Register.

But the issue has not been fixed for everyone.

People writing in a Zoom community chat thread described how the issue was still occurring even after updating the app.

‘Well, that most recent update seems to have made no obvious difference. I’ve just noticed the orange dot again, and when I quit Zoom, Timing.app told me that I’d apparently been on a 2 hour Zoom call.

1,306 thoughts on “Are You Using Zoom on Your Mac? You Should Check Your Microphone Settings After Owners Discovered App Keeps on Recording Audio Even When it’s Not in Use”