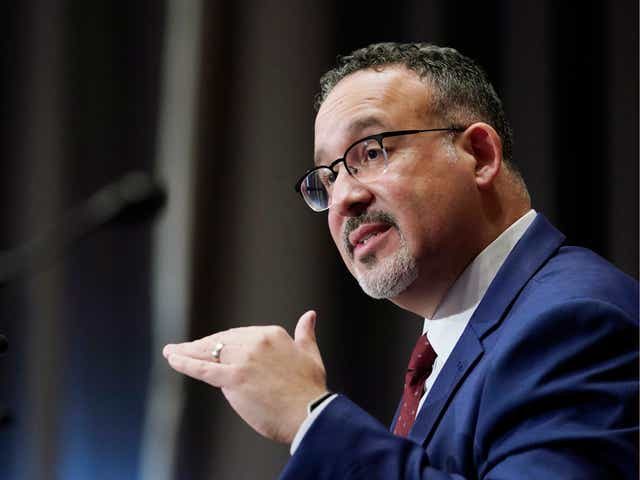 On Monday the U.S. Senate confirmed Miguel Cardona, President Joe Biden’s choice to lead the U.S. Education Department, by a vote of 64-33.

Republicans who voted with Democrats are:

The new education secretary will undoubtedly face negotiating the reopening of public schools with teachers’ unions as the nation continues to manage the effects of the coronavirus pandemic.

White House Press Secretary Jen Psaki revealed in mid-February that Biden’s campaign promise to get the majority of schools open in the first 100 days of his administration was for in-person learning “at least one day a week” and not full-time, in-person learning.

While Cardona had been vocal about the importance of in-person learning for students in Connecticut, he refrained from endorsing any mandates to have all children return to school.

During his Senate confirmation hearings, Sen. Rand Paul (R-KY) challenged Cardona on his statement that it is “appropriate” to allow boys to compete in girls’ sports by asking, “What planet are you from?

The Kentucky senator asked Cardona if he thinks it is “fair” to allow boys claiming to be transgender to participate in girls’ sports and about how it affects girls competing in these athletic events.

“I think it is appropriate,” Cardona replied. “It is the legal responsibility of schools to provide opportunities for students to participate in activities and this includes students who are transgender.”

Asked by Paul if he would enforce the Trump administration’s Office for Civil Rights rule stating boys cannot compete with girls in sports, Cardona responded, “If confirmed, it’s my responsibility and my privilege to make sure that we’re following civil rights of all students. And that includes activities that they may engage in, in high school or athletics.”

“What do you think in general about boys running in girls’ track meets like they’ve been doing in Connecticut?” Paul pressed.

“I think that it’s critically important that … education systems and educators respect the rights of all students including students who are transgender, and that they are afforded the opportunities that every other student has to participate in extracurricular activities,” Cardona answered.

I think most people in the country think that’s bizarre, you know, that is just completely bizarre and unfair that people – and you’re going to run the Department of Education – you’ve got no problem with it. That concerns me, and I think it’s this kind of thing is gonna lead to really just the vast majority of America just wondering who are these people that think it’s okay, what planet are you from? I mean to think it’s okay for boys to compete with girls in a track meet, that that somehow would be fair.