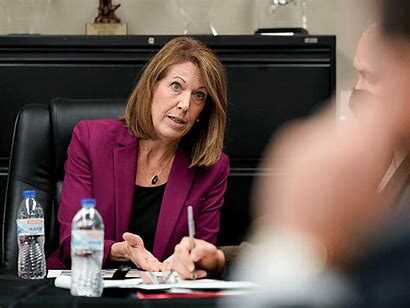 After vulnerable Rep. Cindy Axne, Iowa’s lone congressional Democrat, mocked Christians during an out-of-state campaign event with a far-left activist group, she donned a hijab at Iowa Islamic Center while looking to make a positive impression on voters ahead of the upcoming election.

Axne, last September, was caught on a recording during an appearance with a far-left activist group from New York, Markers For Democracy, where she discussed her party’s response to the coronavirus pandemic when she made vulgar comments about her constituents of the Christian faith.

“So now all the schools are back wanting to put mask mandates in, and all of the anti-vaxxer crazies are out there with their – it’s a hot mess,” Axne said was caught saying. “I’ll be honest, Christian right, everything under the guise while they hold a cross for God or whatever. They use it like a weapon, and it’s painful to watch because they’ve weaponized religion, they’ve weaponized politics.”

While Axne called her constituents of the Christian faith “anti-vaxxer crazies,” she forgot to mention that the Democrat politicians wanted to force restrictions on Americans, which “temporarily closed houses of worship,” which caused the polarization of going to church.

Following many gaffes and mishaps over the past year from Axne, this past weekend looking to correct some of her mistakes and make a positive impression on voters ahead of the upcoming election, she donned a hijab at Iowa Islamic Center.

“I visited the Islamic and Cultural Center Bosniak of Des Moines for an Iftar meal and to meet with members of es-Selam Mosque,” she wrote on Facebook about her weekend. “I left with my arms full of delicious leftovers and a deep sense of pride in the diversity that makes Iowa such a rich community.”

On Saturday, I visited the Islamic and Cultural Center Bosniak of Des Moines for an Iftar meal and to meet with members…

The congresswoman, one of the top targets for Republicans to unseat this year, noted that she was looking forward to her next visit.