600 People! Protested Covid Vaccines and The Redefinition of Marriage 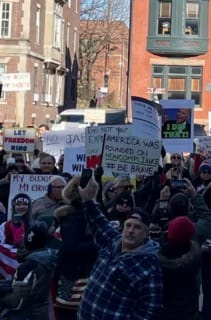 Both houses of the legislature in New Jersey approved a measure that would formally codify same gender marriage in the state’s statues. Currently, marriage equality is protected only by judicial order, meaning that it would be vulnerable if the U.S. Supreme Court overturns Obergefell v. Hodges.

This bill has no religious exemption which means shuls and wedding halls can be sued if they discriminate against a a non traditional wedding. Many came to speak out against the bill at the Senate Budget Committee, last week.

Moments before the bill passed this week in the Senate, outgoing Senate President Stephen Sweeney, D-Gloucester urged his colleagues to vote unanimously to send a message to the country that marriage equity is “a civil right.”

“This is about acting to ensure equal treatment and civil rights for all New Jerseyans, including same-sex couples,” said Sweeney, who is set to leave office next month after a stunning re-election loss.

27 Assemblymen (over a third) didn’t actively vote for it. Final passage in the Assembly:
Yes 53
No 10
Not voting 13
Abstains 4

Many Lakewood residents have expressed their disappointment with Assemblyman Kean for not voting against this bill, after he has been asked by many of his constituents to do so.

On December 2, all 28 Republican Assembly Members refused to show their negative test or proof of vaccination and risked being arrested by entering into the state capital to represent their constituents and vote! The state is now saying that they cannot enter the statehouse to vote.

Six of the Assembly members walked into the capital on Monday, December 20, and risked being arrested and/or stopped by the National Guard. Over 600 People came to Trenton to support them! and protest the vote on codifying same gender marriage which was taking place there and then.

The drama came just hours after State Police troopers blocked the six GOP legislators from entering the Statehouse by locking the doors because the lawmakers refused to show their vaccine cards. The half-dozen lawmakers chose to vote via phone instead, after judge rejected a last-minute court motion they filed to stop these draconian rules, which are discriminatory and unconstitutional. The case is not over; a hearing is scheduled for April.

10 thoughts on “600 People! Protested Covid Vaccines and The Redefinition of Marriage”