‘270 Doctors’ Called Out Joe Rogan – But Vast Majority Of Authors, Signatories Are Not Medical Doctors 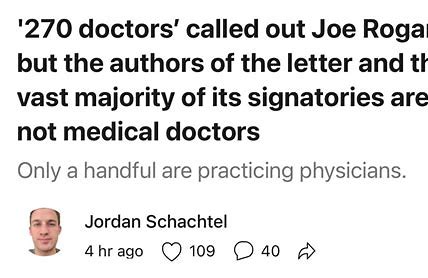 Authored by Jordan Schachtel via The Dossier,

Are you seeing all of those blaring corporate press headlines targeting Joe Rogan this weekend, reporting on a letter from “270 doctors,” which described the famous podcaster as a “menace to public health”?  Well, it turns out that the real arbiters of misinformation are the individuals behind the letter itself, and they are being helped along by a corrupt corporate media that is misreporting the credentials of its signatories.

It was first reported by Rolling Stone, with a story titled, “Doctors Demand Spotify Puts an End to Covid Lies on ‘Joe Rogan Experience’”

Yes, the media and Big Tech want to create the image of a hundreds-strong coalition of medical doctors who are genuinely concerned about Joe Rogan’s conversations on his massive platform.

Well, I reviewed this open letter, and it turns out that only around 100 of the 270+ signatories to the letter are people with qualified medical degrees. And a large chunk of that 100 or so medical doctors are MDs employed at universities who are not in fact practitioners of medicine.

Yet part of the letter reads:

“As physicians, we bear the arduous weight of a pandemic that has stretched our medical systems to their limits and only stands to be exacerbated by the anti-vaccination sentiment woven into this and other episodes of Rogan’s podcast.”

Paradoxically, the disseminators of this petition are guilty of the very misinformation label that they’ve attached to Rogan. In fact, neither of the two reported co authors of the letter — Jessica Rivera and Ben Rein — possess medical degrees. Rivera holds a master’s degree and Rein is a PhD academic who researches psychiatry.

The letter denouncing Joe Rogan and pressuring Spotify to censor his speech has all kinds of random signatories. By my count, the letter is signed by over 50 PhD academics, around 60 college professors, 29 nurses, 10 students, 4 medical residents, and even a handful of… science podcasters.

The letter, which uses the word misinformation nine times in five paragraphs, concludes with a call for Spotify to censor Rogan as part of a policy to “moderate misinformation on the platform.”

Notably, there is no information on who or what group is behind the creation and circulation of the open letter. Rivera, the reported lead author of the letter, is associated with the far-left Rockefeller Foundation and The Atlantic, and she is a CNN contributor.