Board Member’s Disdain For בני תורה 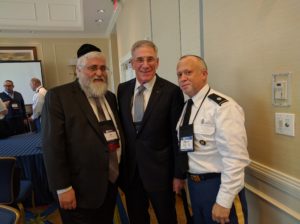 This Monday many came to beseech the zoning board not to approve a cellphone tower on Clifton Avenue for fear of radiation.

The Chairman of the Board Mr. Abe Halberstam treated the public with the utmost disrespect, Mocking bnei torah, and not even trying to hide his cynical attitude towards them.

Here are some of his pearls of idiocy (watch on the link):

4:20:05 – Chairman Halberstam yells at a Yungerman “don’t give us lectures about it”

4:19:50 – Halberstam will not allow a resident to read a letter from Stamar Dayan שליט’א.

4:01:41 – Halberstam discourages a resident from speaking; tells him “Go back to your chavrusa ”

The attorney for the cellphone company spoke numerous times. When a resident asked for a chance to respond to the attorney, Halberstam declared “every person gets only one chance to speak”.

Halberstam has developed a habit to treat the local residents as his loyal subjects. His disdain for לומדי תורה reminds us all of the saying of רבי עקיבא, when he was in his younger years: ” I WISH SOMEONE WILL GIVE ME A TORAH SCHOLAR, AND I WILL BITE HIM LIKE A DONKEY’

57 thoughts on “Board Member’s Disdain For בני תורה”